We’ve always been firm believers that Pork makes you run faster, jump higher and generally be a better person. This point was proven when we did a hog roast surrey at Hampton Court Palace half marathon on Sunday 29th March.

Matt and the team at Run Through asked us to be the sole caterers at the Palace as we are preferred suppliers there. The weather was terrible with near gale force winds, but that didn’t stop nearly 3,000 runners turn up to run through the beautiful grounds.

To help those elite athletes, the Gourmet Hog Roast team were giving out our own free protein shots (otherwise known as bits of sausage) which went down a storm to calm those pre-race nerves.

All in all it was great morning and it was a pleasure to be part of. 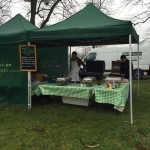 The team doing a hog roast in Hampton Court in Surrey

Latest from our blog

Come to our next Open Day.

To get a feel for the types of Surrey wedding catering you can choose, attend open days to meet cate...

Choosing food for corporate Christmas parties can be challenging, especially when you want to impres...

This website uses cookies to improve your experience while you navigate through the website. Out of these cookies, the cookies that are categorized as necessary are stored on your browser as they are essential for the working of basic functionalities of the website. We also use third-party cookies that help us analyze and understand how you use this website. These cookies will be stored in your browser only with your consent. You also have the option to opt-out of these cookies. But opting out of some of these cookies may have an effect on your browsing experience.
Necessary Always Enabled
Necessary cookies are absolutely essential for the website to function properly. This category only includes cookies that ensures basic functionalities and security features of the website. These cookies do not store any personal information.
Non-necessary
Any cookies that may not be particularly necessary for the website to function and is used specifically to collect user personal data via analytics, ads, other embedded contents are termed as non-necessary cookies. It is mandatory to procure user consent prior to running these cookies on your website.
SAVE & ACCEPT